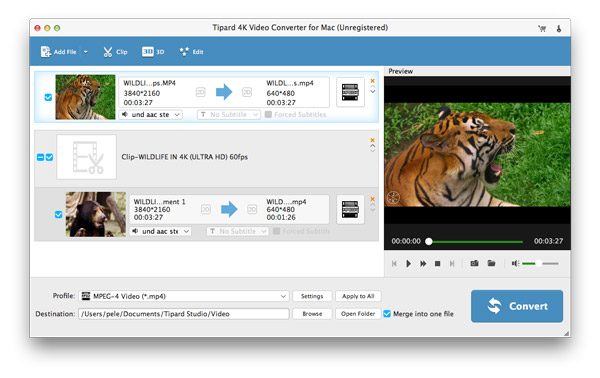 Tipard 4K Video Converter for Mac is the best 4K video converter to convert 4K videos to HD/SD, convert 4K files from one video format to another format quickly, and edit 4K videos professionally on Mac. And, it can also convert HD/SD video to 4K video. Key functions: 1. Tipard 4K Video Converter for Mac is one of the most powerful 4K video converters in the world. It has the ability to downscale a 4K video or upscale a HD or SD video to 4K on Mac for suiting your video player. It is capable of converting 4K videos to 1080p, 720p, and even lower resolution video on Mac for playing them on more devices, like your iPhone, iPad, HD TV, Android phone. And it can also convert a normal HD/SD video from 1080p, 720p to 4K video by increasing the video resolution without decreasing the video quality. 2. Apart from converting a 4K video to/from HD or SD video, the powerful 4K video converter is also able to convert 4K video files to other popular 4K video formats, such as 4K MP4, 4K TS, 4K AVI, 4K FLV, 4K MKV and 4K WebM. When you shoot a 4K film about your family hosting and want to share it with others over the Internet, you need to convert your 4K film to the format that YouTube supports with Tipard 4K Video Converter for Mac. You can also convert it to a 4K format compatible with your 4K TV and play it on your TV at home. 3. Like the majority of video converters, it also owns the capability of editing 4K videos with its excellent built-in video editor. Users are allowed to edit and preview the 4K videos before converting it to other formats. Users can edit 4K videos by clipping, rotating the 4K video to the right angle, adjusting brightness and contrast, turning 2D to 3D, adjusting the audio track and adding watermark, etc. on his or her Mac.
Technical details
Title:
Tipard 4K Video Converter for Mac 9.1.30 from OS X
Requirements:
512MB RAM, Super VGA (800×600) resolution, 16-bit graphics card or higher
OS Support:
Mac OS X,
Language:
English
License:
Shareware
Release date:
December 22, 2021
Author:
Tipard Studio (https://www.tipard.com/)
Tipard 4K Video Converter for Mac 9.1.30 Changelog